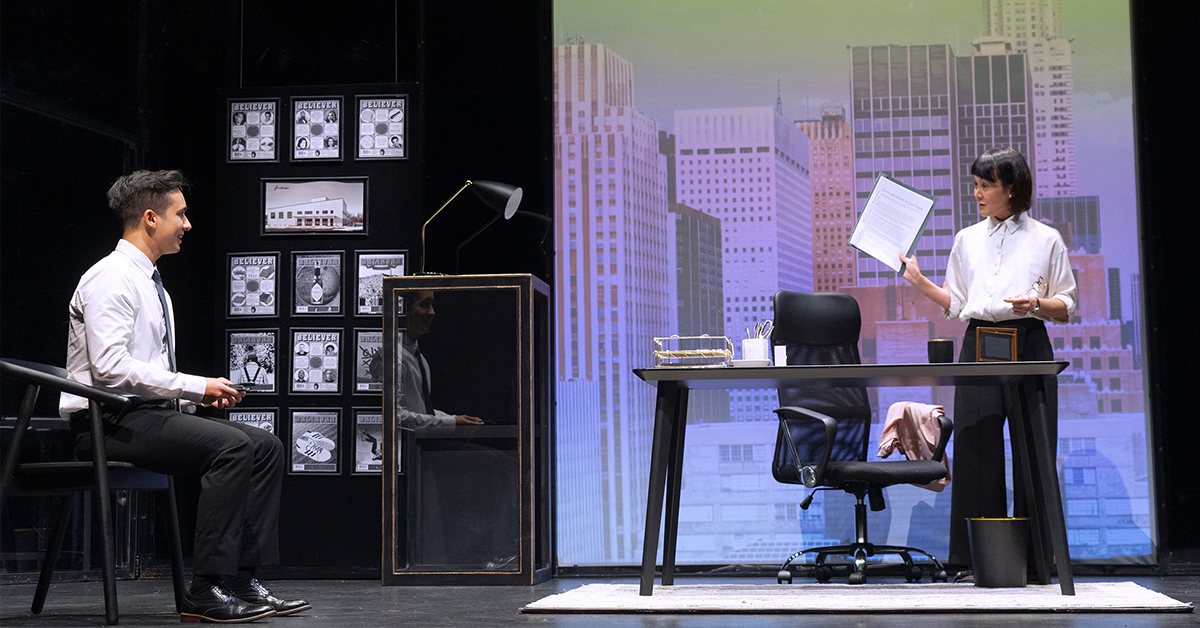 Audience Review: A Work of Art

Earlier this week I was discussing changes to an upcoming article of mine with an editor, and this passage fell under the microscope:

Ours was an ill-fated domestic arrangement, which was a shame, because it was only later, long after he moved out, that I discovered my mysterious roommate with respiratory issues was the bright, funny, and talented Mr. Wachtel. Just as it took time to recognize all of that, it took time for me to discover the treasure trove of articles in his new, two-volume compendium.

The editor wondered whether I really did not know the name of the person staying in my condo, and since he guessed I was kidding about that, perhaps I should explain how I came to learn all those positive attributes.  Unlike his other suggestions, I balked at changing that passage.

I was reminded of the exchange last night while watching SRT’s new comedy The Lifespan of a Fact.  A young intern at a magazine, Jim Fingal (Jamil Schulze) is assigned by Emily (Janice Koh) the senior editor to quickly fact check a piece by star writer John D’Agata (Ghafir Akbar).  He has five days, he is young, eager, and remarkably diligent. It should be simple,  but there are a few problems. Even the very first sentence is a problem. Are there thirty-four strip clubs in Las Vegas, and how does one count them: total nudity, partial nudity, serving alcohol, not serving alcohol, and for that matter, what about male strip clubs? How about that Tabasco bottle, where was it found? And the woman who played tic-tac-toe with the chicken, in which state did she live? Those are all in the first sentence!

I did my own fact checking, with help from Ghafir and Jamil after the show. Would it take nine seconds, or only eight to fall eleven hundred and forty-nine feet? I couldn’t look it up during the show, but I remembered terminal velocity as being 130 mph, so nine seconds seemed just right. After the lights came up, I did look it up, and found terminal velocity given as 120 mph, unless the faller assumed an aerodynamic pose, and then 150 to 180 was possible. If you dived headfirst, and accelerated smoothly to 180 mph at 32 feet per second/per second, it would still take around 8.3 seconds, which seemed optimistic. “Ah, but the observation deck is lower than the top of the building,” said Ghafir.  You see? Getting the facts right is hard! And while Ghafir was helpful, his character, John D’Agata has no interest in cooperating with Jim Fingal.  He is striving to create art, to provide his readers with a truth that is greater than the sum of its facts. 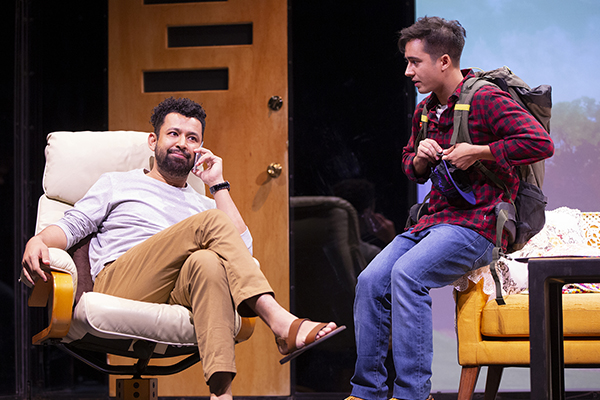 Stories about writers tend to revolve around writing that isn’t actually very good. This story is an exception, because it really does revolve around a piece of very good writing. Central to the story is a tragedy, the suicide of a sixteen-year-old named Levi Presley, who in 2002 jumped from the Stratosphere, the tallest building in Las Vegas.  The following year John D’Agata submitted his essay – the term he prefers – to Harper’s. They disagreed with its style, and it came to the attention of another magazine, The Believer.  Jim Fingal was assigned to fact check the piece, and thus began a seven-year collaboration. The essay, “What Happens There,” appeared in the magazine in 2010, and their book The Lifespan of a Fact came out two years later.

Emily, however, is a fictional character. She serves as the Ego, balancing Jim as Superego, and John as Id. She, if real, and Jim would not have needed to fly to Las Vegas to confer with John, because The Believer is headquartered in Las Vegas.  If the play were a work of fiction the issue would not come up, but having told you the play is based on fact, it raises an expectation that the story will hew to fact. Or does it? By now most of us, seeing the announcement, “based on a true story,” take for granted much of it isn’t true.  Or do you? Does the audience expectation matter, and if so, how much does it matter?

These are the issues that provide dramatic tension. The play does a delicate job of balancing the opposing viewpoints.  Perhaps it leans toward “a little fiction” is the salt the roast needs. That is the artistic sense of things, and this is a play, not a news report.  Too, Ghafir is an extraordinary actor, who can do as much with stillness as most actors manage with a soliloquy. But Jamil is at his best when he gives a fiery defence of facts, and why and how they matter.  In an era of fake news, they matter more than ever.

The Lifespan of a Fact is playing at SRT’s KC Arts Centre through the 14th of March. The director, Daniel Slater, penned a timely essay on press freedom for the program, icing on the cake of his solid direction.  The ideas are important, and whatever facts it contains are interesting, but show stands and falls on its art. The Lifespan of a Fact is a work of art, one you would be sorry to miss.