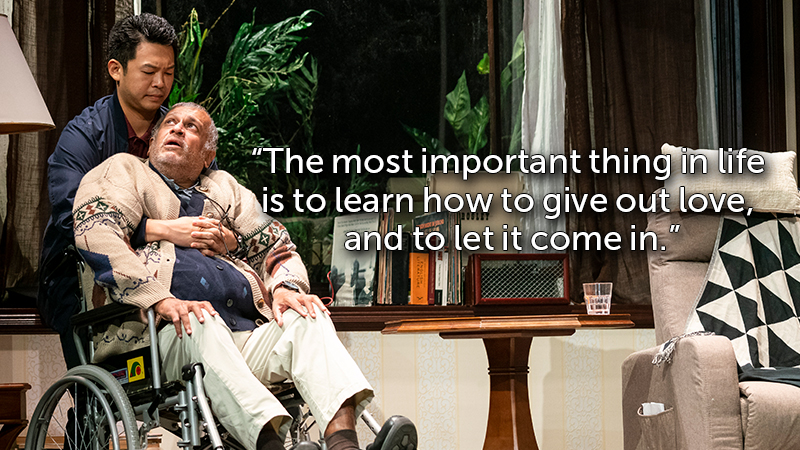 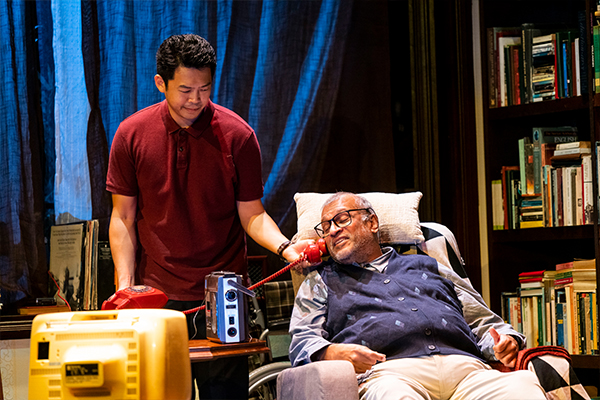 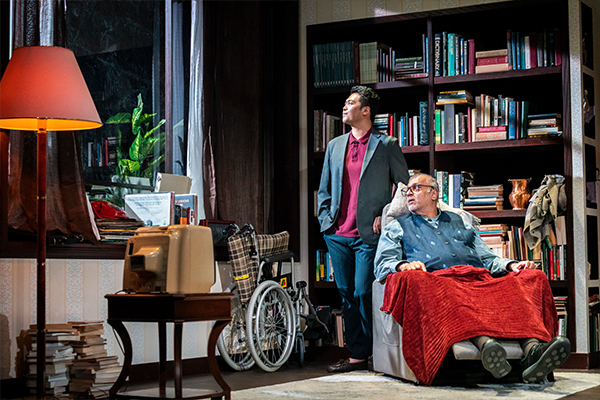 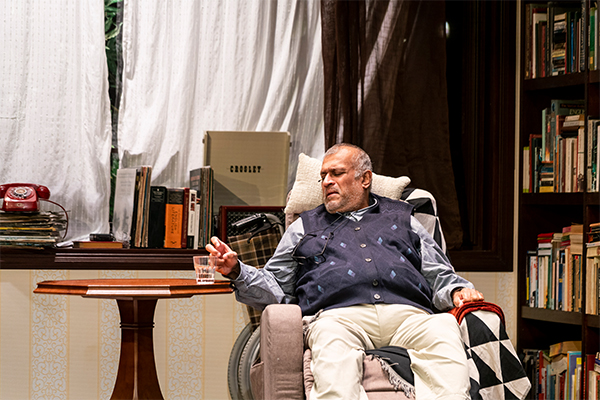 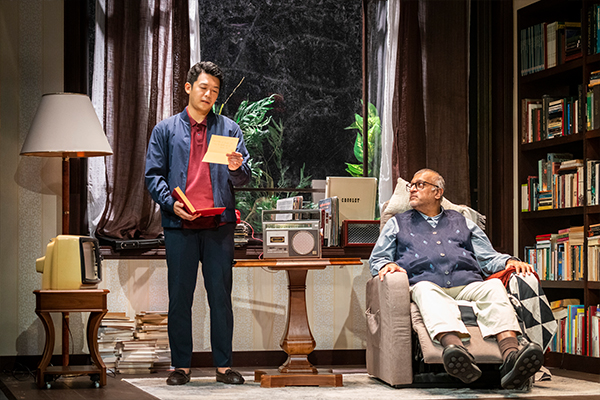 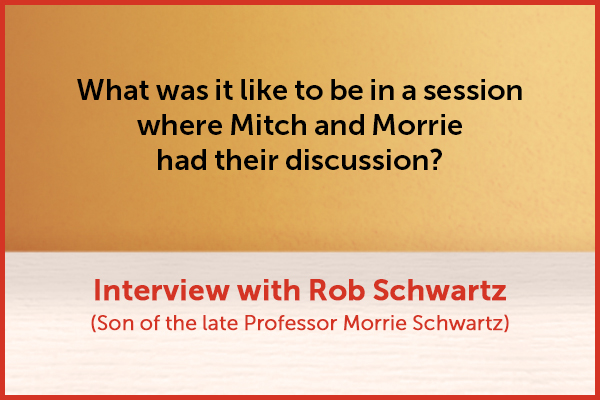 Tuesdays with Morrie was performed at the KC Arts Centre – Home of SRT from 1 Nov to 11 Dec 2020. The live recording of the performance is now available for digital streaming.

Curious to find out more about Morrie Schwartz? Check out this interview with Rob Schwartz, son of the late professor Morrie Schwartz, who shares plenty of nuggets about his father. Find out what it was like to sit in a session where Mitch and Morrie had their discussions, and how deep their friendship actually was in real life.

Based on Mitch Albom’s best-selling memoir, Tuesdays with Morrie is a play so touching, powerful and celebratory it may change your outlook on life.

"a message worth repeating in these divided times"
- The Straits Times

“There are many moments to recall, some to smile at, others to cry on, emotional nuggets to take away.”
- SassyMama

Sixteen years after graduation, career-obsessed journalist Mitch reunites with his former college professor and mentor, Morrie, who is battling Lou Gehrig’s Disease (ALS). What starts as a simple visit turns into a life-changing weekly pilgrimage – always on Tuesdays – that enables Morrie to teach his final and most important lesson – how to live.

The role of Morrie will be performed by Remesh Panicker (Art, Romeo & Juliet, Merchant of Venice) while Benjamin Chow (Romeo & Juliet, The LKY Musical) will perform the role of Mitch. Directed by Samantha Scott-Blackhall. 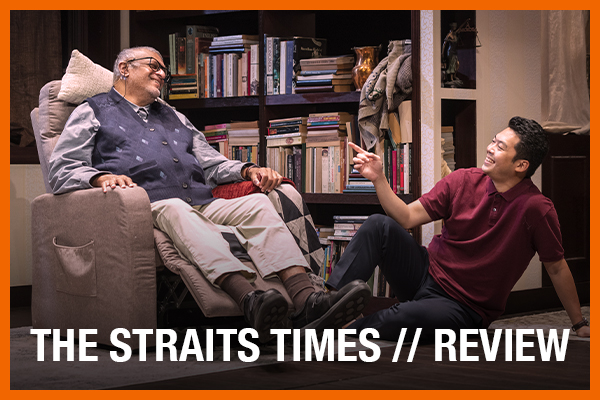 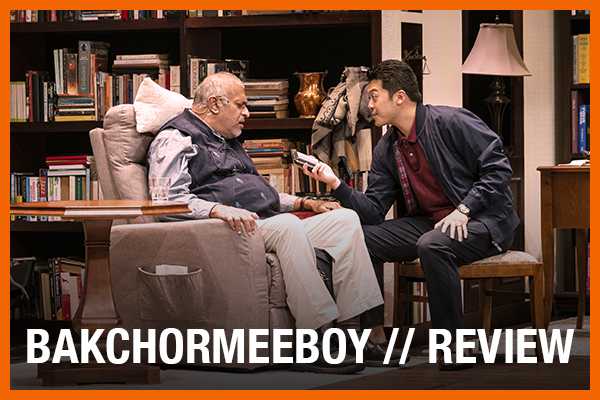 The digital streaming of Tuesdays with Morrie is restricted to patrons in Singapore only.

Ticket link is valid for 48 hours of viewing from the selected date.

Tickets have to be booked at least a day in advance of the preferred streaming date. The link is valid for 48 hours from midnight. 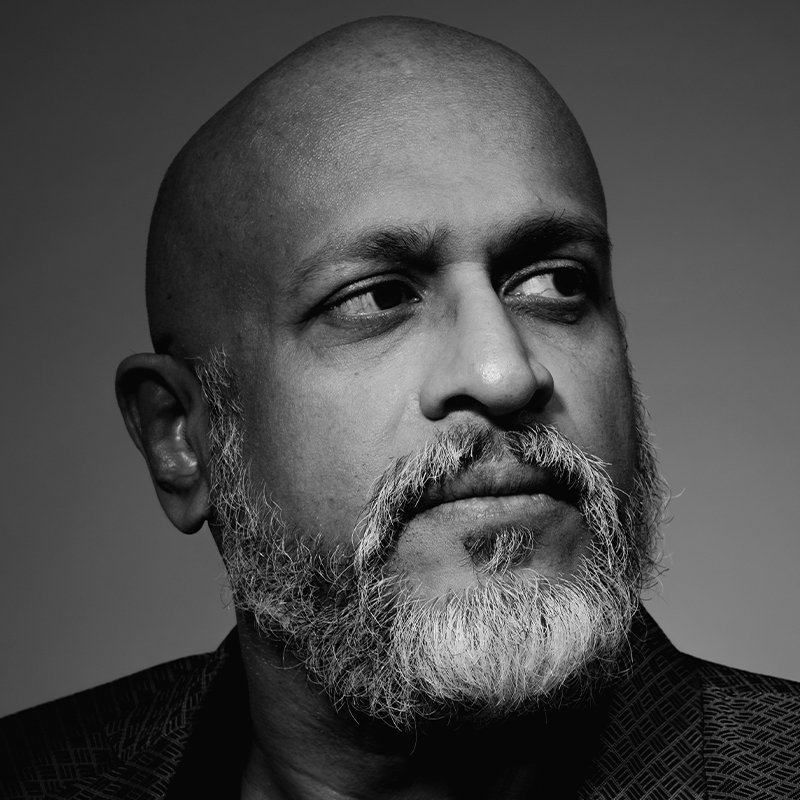 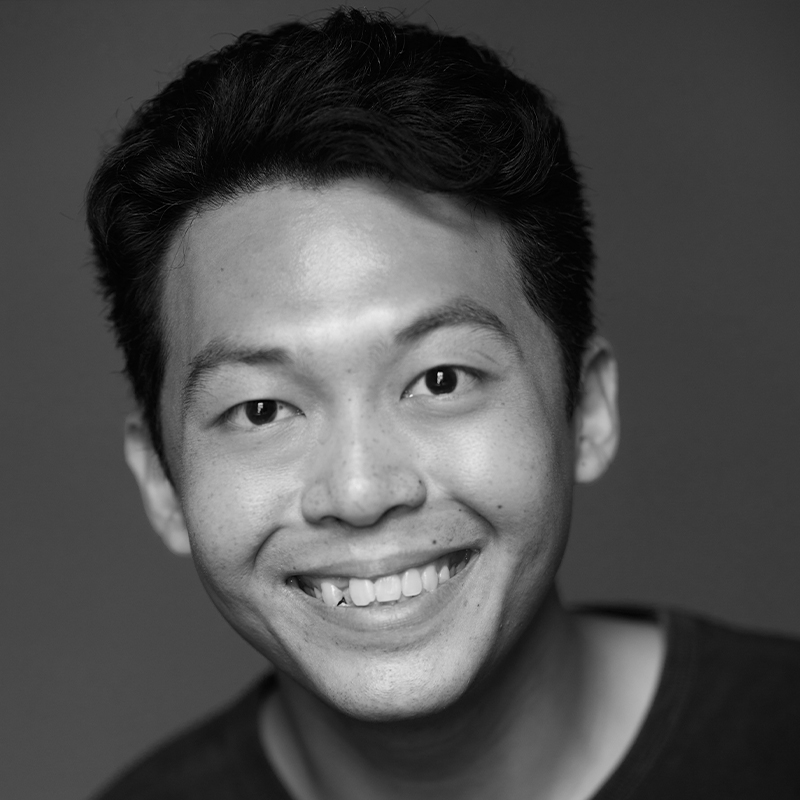 This critically acclaimed actor has worked with local and international directors, in drama and comedy, in Singapore and abroad, from Shakespeare to broad comedy.

He’s played God and the Devil, breathing life into an eclectic assortment of characters - from a talking vaudevillian chicken to Shylock, a brilliant but declining mathematician to a gormless go-between, a beloved Hindu deity to an apartheid-era African, a blue-collar Malaysian tradesman to the Ghost of Christmas Present.

Along the way, in addition to rave reviews, this former Associate Artistic Director of the Singapore Repertory Theatre has picked up 5 LIFE! Theatre Award nominations and 3 wins - Best Actor (ART), Best Supporting Actor (Proof) and again, Best Supporting Actor (Merchant of Venice), and an Asian Television Awards nomination for Best Actor (The Hush).

His forays into TV and film are more recent, with his portrayal of Nelson Kumar and Dr. D’ Silva in Weiyu Films’ The Hush and Derek, respectively. He was previously seen on local telemovies Common Space and The Learning Curve.

But Remesh’s “day-job” is not in front of the camera or under the theatre spotlight.

He’s a multi award-winning executive producer, writer, script doctor and creative consultant with extensive experience in the documentary and drama genres. He also works with corporations in several areas - providing advice on communications, strategy, creatives and production, including speechwriting for their C-suite bosses.

Remesh’s other job - professional narrator, voice talent and voice actor - is something he’s been doing for nearly 45 years. He’s clocked over 2000 hours of recordings for blue-chip commercials, corporate films, animations, on-air promos and prestigious LIVE events. But his passion is giving voice to documentaries - something he’s done for award-winning programmes on the Discovery Channel, the National Geographic Channel, the History Channel, Bio Channel and Channel News Asia.

He dedicates his journey on Tuesdays with Morrie to all who have supported his theatrical indulgences these past 45 years, especially his encouraging family.

As an actor, Benjamin has been seen, notably, as ‘Bobby Strong’ in Urinetown (Pangdemonium), ‘Kin Jek’ in Press Gang (Wild Rice), 'Mark' in RENT the musical, ‘Smee’ in Peter & The Starcatcher, 'Benmin' in Tango (Pangdemonium), 'Prince Tun' in  Forbidden City: Portrait of an Empress (SRT) and as 'Lim Chin Siong' in The LKY Musical (Metropolitan Productions) the last two roles earning him Best Supporting Actor twice at the Life! Theatre Awards. He has also been seen in Dragonflies (Pangdemonium), Lao Jiu (The Theatre Practice), My Love is Blind (Generasia), Romeo & Juliet (SRT), Knuffle Bunny and Elephant and Piggy (Players Theatre), The Three Billy Goats Gruff and Junior Claus (The Little Company) and heard as the ‘Scientists’ in Til the End of the World, We’ll Meet in No Man’s Land. As a director, Benjamin helmed Into the Woods (TEMAN) in Jakarta, and The Cave, an original work by Annabel Tan presented at the Twenty-Something theatre Festival. Benjamin is also a working Voice Over professional whose audiobook work can currently be found on Storytel.

This March school holidays, have fun with Mandarin AND hone your drama skills!

A workshop on cutting edge technologies to enhance accessibility for theatre