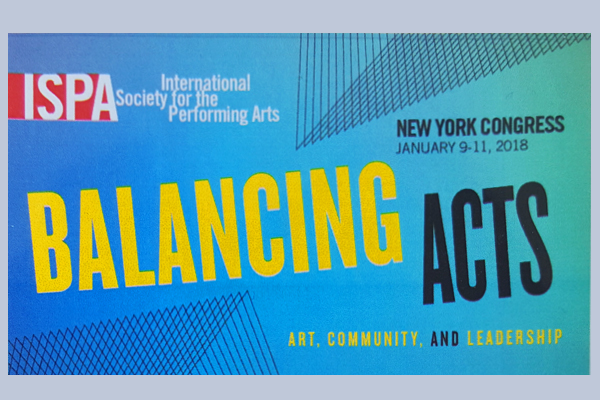 International Society for the Performing Arts and thoughts on art, community and leadership.

In what was considered the coldest winter since 1962, 500 cultural leaders from 55 countries participated in this annual conference in New York. An important conversation was had around our role in the community. How we foster community and how we as leaders ensure that our work has impact beyond ticket sales. Most thought provoking was the debate contribution by Basma El Husseiny, who has been involved in cultural projects in the Arab region for the past 30 years. A truly inspiring leader who spoke so very passionately about how the arts can bring people together especially in conflict zones – and how indeed it is our obligation to do so. It was a great reminder to me and the other participants that our work has much bigger impact – and obligations – than telling great stories well.

I was also very inspired by the animated Jenny Sealey, who does amazing work in the access area being a hearing impaired person herself. Jenny spoke about the lack of platforms for people with different disabilities being involved in the arts – from wheelchair access to signed performances. I am thrilled to say that SRT is taking a bigger stand in this area starting with signed performances for all our children’s productions, and the launch of relaxed performances – first off during the run of The Curious Incident of the Dog in the Night-Time, which we are presenting in partnership with Esplanade this March.

And of course one can’t visit Broadway without seeing a show or two and dream, that this theatre one day will return with a Made in Singapore. After all:

“There is nothing like a dream to create the future.” ― Victor Hugo, Les Misérables

Great inspiration, and good to be reminded that the arts plays a huge role in our conflicted world, and that our job as arts managers have the same challenges and rewards here in Singapore as they have anywhere else – from funding to the development of new ipad generation audiences.